San Antonio is a very picturesque city with many cool historic sites and attractions from the River Walk and San Fernando Cathedral to the Alamo. Although these spots are absolutely amazing to see during the day, they are even more delightful in the evening when the lights begin to turn on. Once the evening comes, there are great opportunities for some evening photography in downtown!

As twilight breaks in, make sure to check out the nightlife along the San Antonio River Walk. During the evening you will see many people walking the banks of the river along with the many boats cruising up and down the San Antonio River. For a very picturesque photo of the River Walk, I would stand on the northern side of the Market St bridge to the west of Alamo St. Here you will see the Tower of Friendship (La Antorcha de la Amistad) as well as the bridge which goes over a spur of the river as well as many people dining along the river. The Rio San Antonio cruise boats always come down the San Antonio River and then under the bridge as they head toward the Rivercenter where the Marriott Rivercenter and Marriott Riverwalk hotels are located. The boats are lit up during the evening, and you can get a spectacular photo of one of the boats going in or out of the Rivercenter area under the bridge with the Tower of Friendship in view. Even if you are not stationing a tripod to get that photo, this spot on the bridge is a great location to see the San Antonio nightlife in action! 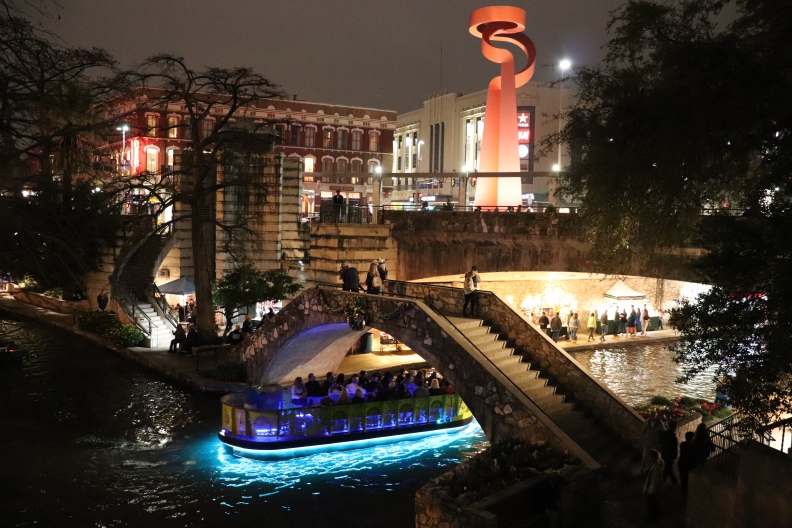 A trip to San Antonio is never complete without visiting the Alamo. The Alamo was once the site of a very important historic battle in 1836 between Texas (once under Mexican control) and the Mexican army. Although the Texian army was defeated at the Alamo, they eventually launched a surprise attack on the Mexican army where the San Jacinto Monument near Houston, TX is located today which led to Mexico’s defeat and independence for Texas. The Alamo is open during the daytime for historic tours which I highly recommend for the history. Be warned that the line for the main shrine can get lengthy during the middle of the day. However, for the best photo, I would wait until after the sun goes down and the Alamo has closed for the day. Even though the Alamo grounds are closed, people are welcome to admire the shrine from the front of the Alamo without all the crowds. Lights shine on the historic shrine, and they provide such a beautiful sight of the Alamo as the flag of Texas flies proudly next to it.

San Antonio is a must-visit city when planning your itinerary for exploring the state of Texas. Although the San Fernando Cathedral, the San Antonio River Walk, and the Alamo are great to visit during the day, you can see them come alive during the evening when lights begin to shine on these sites. If you are looking for great spots for some nighttime photography in downtown San Antonio, these are some of my recommendations. However, these are not the only spots where you can get some great nighttime photos as there are many great photo opportunities throughout the city in the evening!

Check out my travel vlog of my day and two evenings in San Antonio!