After crossing into upstate New York, I made my way over to Saranac Lake, NY. Before I could arrive there, I traveled through the Adirondack Mountains. From the border with Vermont, I stayed on Highway 9N between the mountains and Lake Champlain until the highway made its way westward from Westport. As soon as I got past Elizabethtown (a few miles west of I-87), I made it into the heart of the Adirondacks. As I made my way toward Keene where I would jump onto Highway 73, I happened to see many great mountains on both sides of the road. It felt like I was back in the Green and White Mountains of northern New England again!

Making my way toward Lake Placid, there were some great sights which were so beautiful that I had to pull off the road to either take pictures or film some segments for my travel vlogs. On the mountains, you could clearly see some rocky cliffs being camouflaged by the deciduous trees which had not grown their leaves yet.

Further west on the highway lies a beautiful lookout of the mountains on both side of the road along with the calm Cascade Brook which flows into Upper Cascade Lake and Lower Cascade Lake. You can tell that a certain highway is worth traveling if it tells you to stop and take a look at the beauty of nature!

After admiring the landscape, I realized that I was running very low on petrol again. Fortunately, Lake Placid was only several miles away. Instead of taking the shortcut over to Saranac Lake, I drove into downtown Lake Placid. Lake Placid is where the 1932 and 1980 Winter Olympic Games were held. As you drive into the city, you can still see one of the ski jump tracks. When I drove through Lake Placid, the city was very beautiful, and there were many tourists in town even for a Monday. Although Saranac Lake would be where I would film a Let’s Visit video, I would like to check out Lake Placid in the future.

Anyway, I was able to fill up the gas tank in Lake Placid, and I continued my way to Saranac Lake. Saranac Lake is not too far (only several miles) west of Lake Placid. I had finally made it to “The Capital of the Adirondacks”. Nestled along the banks of the Saranac River and Flower Lake, created by a dam built in 1827 to power a sawmill, Saranac Lake is quite beautiful with a small downtown area, great restaurants, and a nice walk along the lake. As I walked in downtown, it is almost hard to believe that the town was originally a home for “cure houses” where people diagnosed with tuberculosis stayed to help treat the disease. However, as antibiotics for tuberculosis were being made in the 20th Century, the cure homes faded in the 1950s. Nowadays, tourism helps with the local economy along with nearby Lake Placid. 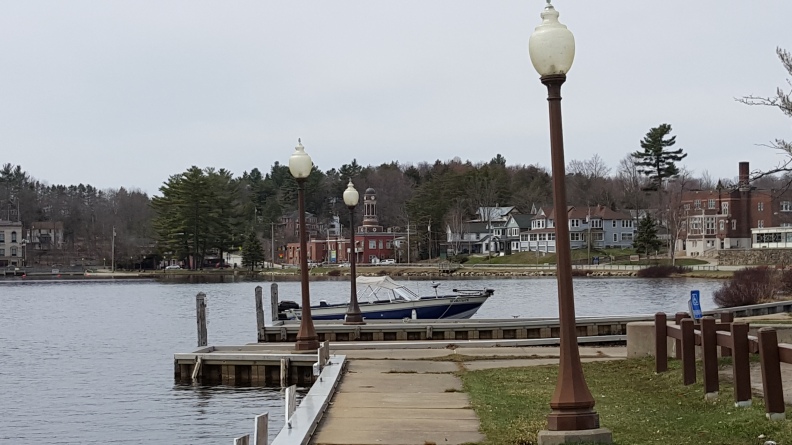 After walking in downtown, I followed a trail which goes along the Saranac River leading over to Flower Lake. The views are quite pretty with the mountains in the background. Not too far from the main downtown strip lies a parking area for public access to Flower Lake. It was there where I was able to take pictures and film a bird camping out on top of a wooden fence.

Before leaving Saranac Lake, I stopped in at the Blue Moon Cafe to get some lunch. The food there is really good, and there is a public parking lot across the street. Therefore, there is no excuse not to eat at this restaurant. I had a grilled chicken panini with a side of potato chips. With the melted cheese on the panini, it was really delicious, and it was exactly what I needed before getting back on the road.

If I would have had more time in Saranac Lake, one place which would have been neat to visit was Baker Mountain where you can get a great view of the town along with Flower Lake. Although it does not compare to many of the mountains in the Adirondacks such as Whiteface Mountain and Mount Marcy, the tallest mountain in New York, it still provides a great view. Speaking of Whiteface Mountain, I would love to come back to the Adirondacks in the future as you can get a beautiful view of the region from the top of Whiteface Mountain. Unfortunately, the road is not open until May. As I was visiting during April, it gives me the perfect excuse to come back!

Although it was sad to leave the Adirondacks, I had a 5-6 hour drive ahead of me as I was staying the night in the Buffalo metropolitan area. I drove off in my car feeling great that I visited the heart of the Adirondacks although I am aware that Saranac Lake is called the “Capital of the Adirondacks”. I have one more blog post planned highlighting the New England road trip of 2016, so please stay tuned! Thank you for reading this blog post, and this is Scott signing out!